Defence Research and Development Established (DRDE) is one of the premier laboratories under the umbrella of Defence Research & Development Organisation (DRDO), nation’s premier defence research organisation. The history of DRDE goes back to Jiwaji Industrial Research Laboratory (JIRL) established at Gwalior in 1948. Just after the Chinese aggression in 1962, this laboratory was taken over by DRDO as an attachment of Defence Research Laboratory (Materials), Kanpur. DRDE has been working relentlessly to serve the nation by developing technology and products for defence against Chemical and Biological (Chem-Bio) threats for armed forces as well as for society after becoming an independent laboratory since 1973.

Today, DRDE has evolved as a centre of excellence with technological core competence in detection, protection and decontamination against chemical and biological warfare agents by virtue of its expertise developed and experience gathered through the last five decades of R&D efforts. The laboratory has many distinctions of being the only laboratory in India having OPCW (Organization for The Prohibition of Chemical Weapons) designation for off-site chemical analysis of environmental and biomedical samples for CW agents.  Moreover, a new facility known as Centre for Advance Research on Biological Defence (CARBD) is being established at Gwalior to handle pathogenic microbes.

Due to its unique mandate, DRDE has developed quintessential capabilities in the area of synthesis and handling of CW and biological agents respectively and also developed products and technologies for their effective mitigation through detection, protection and decontamination. DRDE is the major stakeholder of the NBC inventory of the tri-services. At present, out of thirty six inventory items, twenty four products have been developed by DRDE which roughly caters more than seventy percent Chem-Bio Defence requirements of our country. In the area of detection, the products range from the simplest three colour detector paper (TCDP) to technologically complicated ion mobility spectrometry (IMS) based chemical agent monitor (CAM) and automatic chemical agent detector and alarm (ACADA).

ACADA contains two highly sensitive IMS cells for continuous detection, and simultaneous monitoring of Nerve, Blister, Blood and Choking agents along with several toxic industrial chemicals (TICs). This is a fixed-point man portable CWA detector with battery and can also be mounted on a vehicle. It has provision of Audio & Visual alarm. Detector has a remote alarm unit for receiving data at the central monitoring station. Detector is useful during both war and peacetime. It can detect very low concentrations of the Nerve (0.05 mg/m3), Blister (0.5 mg/m3), Blood (20 mg/m3) and choking (20 mg/m3) agents with a response time of < 1 min. The detector comes with a pre-programmed chemical data library, which is expandable and can be updated based on the user’s requirements. This IMS technology is being modified for effective deployment in tanks, ships (Si-CADS) and aerial platforms.

In today’s scenario, the threat of nuclear, biological and chemical (NBC) agents is of great concern worldwide. Therefore, it is of utmost importance to have the advanced and effective protective gears for our military forces. NBC Mk-V suit has been developed in order to overcome the problem of low crushing strength and less surface area of the earlier used activated carbon sphere (ACS). The performance of protective clothing was evaluated as per US MIL STD 32102A. Chemical protective performance tests include break through time test under ambient conditions and also under stress i.e. Mandrel test and pressure i.e. expulsion test. Both the test simulates the field conditions under which a wearer can get the contamination. The test results revealed that the NBC suit Mk V can provide protection in a contaminated environment for more than 90 h. This has made our country self-reliant in terms of the NBC coverall. Additionally being economical, it shall not only reduce imports but also fetch a lot of foreign exchange due to high export potential. The product is fully indigenous and at par with the technology available at International level. This is a step ahead in making India Atmanirbhar in the area of Chemical protection clothing for the services.

DRDE has also developed several adsorbent materials for effective cleaning of contaminated air in filters for tanks, ships, submarines and for canisters for individual protection. Decontamination formulations and kits are also developed for area and personal decontamination of CBW agents after rigorous laboratory experiments and field trials. Internalisation of CBW agents causes very tricky conditions in affected persons. They should be treated with specific medicines in quick succession of time. Hence first aid kits (FAK) are developed containing all essential generic medicines for CBW scenarios. This kit contains auto injectors loaded atropine and PAM. Besides those other drugs like pyridostigmine, potassium iodide and N-acetylcysteine, paracetamol, antibiotics are also part of that kit. The kit is so critically designed that it can cater a first aid kit along with quick skin decontamination of the victim. Povidone iodine and mupirocin skin ointments are also provided for topical applications. Several CW agents cause severe coughs in the victims. Hence codeine tablets are provided to address this problem. Beclomethasone inhalers are also provided to address respiratory distress. Amylnitrite inhalants are provided for cyanide poisoning. NBC protected dressings are also part of this kit.

Several diagnostic kits have been developed for rapid detection and diagnosis of biothreat bacterial agents including anthrax, plague, glanders, brucellosis, malioidosis, tularaemia and cholera etc. Arrays of molecular and immunological detection and diagnostic systems have been developed for biothreat and exotic viral agents including swine flu, dengue, chikungunya, Ebola etc. 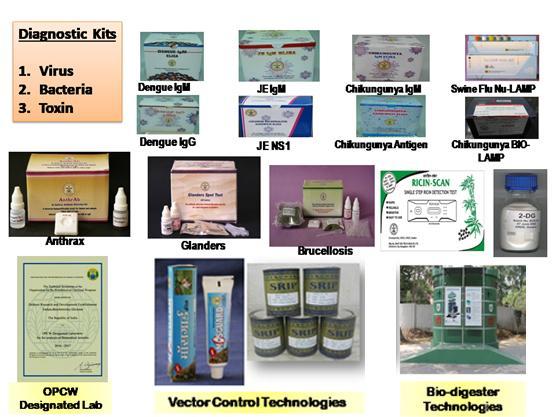 DRDE has contributed immensely in the investigation of outbreaks caused by the above-mentioned microbial agents in the country as and when required. During Covid-19, DRDE played a pivotal role in detection by RT PCR, development of hand sanitizers, and by providing services for test and evaluation of masks, PPE kits etc. Next Gen sequencing helped the state in monitoring the spread and emergence of new variants of coronavirus.  The process for the repurposed anti COVID drug 2-DG has been developed at DRDE.

DRDE also developed several vector control technologies and products in the form of spray, cream and paint. These products are found effective against multiple insects like mosquitoes, bedbugs, ticks, cockroaches etc in field conditions. DEPA spray and lotion are well known products being used by armed forces in remote areas. Bioremediation of human waste is the area where DRDE has a special standing. Most of the bioremediation technologies have been developed at DRDE and transformed into products called bio-digesters. These bio-digesters are being used at high altitudes, plain and coastal areas and also in railways. This unique technology has improved the sanitation and added immensely for the mission ‘Swachh Bharat Abhiyan’.

Overall, DRDE has played a pivotal role in the development of systems and technologies for armed forces with a spin-off potential in the civil sector. Development of products for chem-bio defence viz. NBC permeable suit Mk-V, CAM, ACADA and many others have made India not only self-reliant but also opened new vistas for export of these products. DRDE is also active to give effective technological solutions in non NBC domains like development of processes for 2-DG and bioremediation of human waste for national interest. With relentless efforts, DRDE is striving to achieve excellence in Chem-Bio defence technologies and always remain a flag bearer in this area by developing cutting edge technologies in all three areas detection, protection and decontamination against CBW agents.

UP To Have 5 International Airports

DGCA Carried Out 353 Spot Checks As Part Of Special Drive

To receive the latest updates on Indian aviation and defence